Over on Pinterest, I have a whole board dedicated to fantastic looking master suite retreats. I collected several ideas. Our home is small and was finished right before Corey (my husband) and I got married, so there wasn’t any time (or money) to customize and decorate when we first got married. Instead of actually getting to build and install my ideas, I pinned ideas for the house. Last month, one the ideas I fell in love with immediately was built and finished. Corey did all the step-by-step handiwork to bring my idea to life! 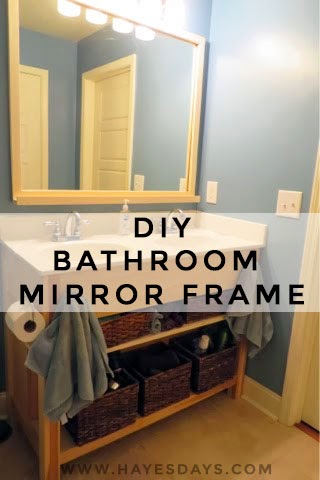 I was allured by this picture after I saw it on Design*Sponge:

I loved the framed mirrors and I loved all the storage! My only hold up was my space to recreate this. I have a very small space. I wanted a five piece bath in a space that probably should only be holding three or four, so there wasn’t any room for that gorgeous shelf in the middle on top of the vanity or the thick, ornate molding frames. We have a double sink, but no counter space. We have an amazing custom vanity, but only one shelf.
Here’s the before vanity: 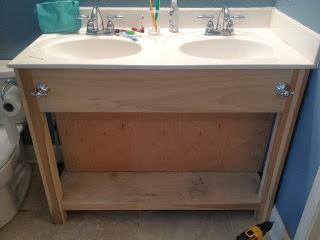 (Excuse the messes. We were already getting started when I decided to document this.) 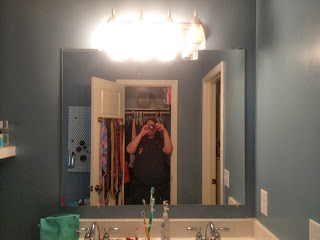 There’s the “before” mirror.

There’s nothing wrong with it, so it didn’t need replacing. I decided I would have to modify the ornate frame around the “pinspiration” for our space and add a storage ledge onto the frame, like a chalkboard ledge, for things like toothpaste and toothbrushes. I got to work taking measurements and sketching what I thought it should look like. This is what I took with me to the big box hardware store to pick out wood with. 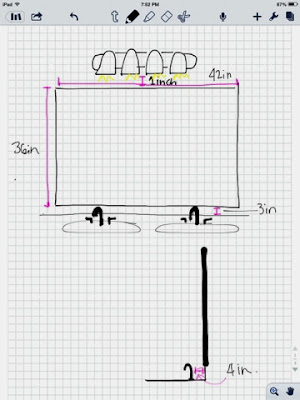 I used an app called Notability to sketch and make notes. This is where Corey took over. All I knew is that I wanted a shelf attached to a frame, an additional shelf on the bottom so that I could put more baskets down there for storage, and that it needed to be Alpine Birch wood to match the custom vanity already installed.

The big box store had precut pieces of Birch in various sizes, so we compared the measurements and picked out wood. I learned something new in the lumber isle that day. A 2×4 is not actually a 2×4, but rather it’s really more like a 1.5×3.5. The “2×4” is just a rough dimension and the whole numbers are easier to add and subtract. He did all the math in his head (crazy talk!) and we bought the lumber for the frame and bought a piece for the shelf.  In order to make sure that the cuts were straight, he had an employee in the lumber department cut the lumber for us. We also picked up some “L” shaped brackets, washers, wood nails, mirror mastic, and wood pegs.


This is where something happened with my pictures. When I updated to iOS 7, the majority of my pictures of steps disappeared, so now this becomes the story of a do it yourself project.
First, Corey built the ledge for the frame. We picked a piece that was 1 inch wide, 3 inches deep, and 48 inches long for the toothbrush ledge. He used wood nails to put a piece of wood 1/16 of an inch thick and 1 inch deep to keep the toothbrushes from just falling right back off the ledge.

After he assembled the ledge pieces together, he drilled holes into the back of the ledge for the wood pegs and into the bottom part of the frame for the mirror. (Dimensions are in the next step for the frame pieces.) Using wood glue and clamps, Corey attached the ledge to the bottom piece of the frame. He let that set for at least an hour so that the wood glue dried and it would be sturdy enough to hold what we wanted to put on it.
Next, we took the pieces that we chose to build the frame. We picked one long piece and had it cut to the measurements we needed. I chose to square off the joints instead of mitering them. (Incase you’re like me and didn’t know, here’s a great article on mitered joints over on wiki.) These pieces were 1 inch wide and 2 inches deep.  Corey connected the top, left, and right pieces together using wood glue. After letting the three pieces dry together, more pegs and wood glue were used to affix the ledge to the top, left, and right part of the frame. After that step, he let the frame dry over night.

In the meantime, he installed the new shelf. This was much easier than the frame, at least from my point of view. I picked the height I wanted it at, Corey screwed the “L” brackets into the legs of the vanity and the back, and boom! the shelf was installed. 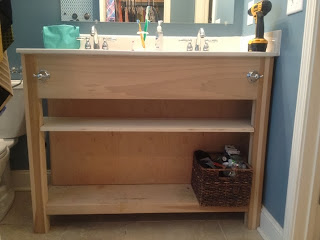 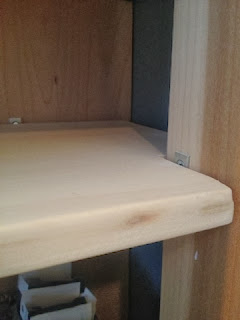 See the “L” brackets?
The next day, we went back to the frame and mirror. He sanded down the edges were the glue had seeped out a little and to make the square joints look clean. Corey didn’t want to have to cut out a space for those interesting plastic brackets that come with a builder’s grade mirror to hold them up. He found this tutorial where they replaced the plastic brackets with washers. Corey switched it out and it worked! Be careful screwing the washers on because we popped off a corner of the mirror. Thankfully it was a small corner and the frame covered it up.
He used mirror mastic to glue the frame to the mirror.  Just to make sure, he used “L” brackets again to sit the frame on so there was extra support.  The mirror mastic had to dry for 24 hours before we could sit anything on the ledge, but the project was done!
Here’s the finished project! 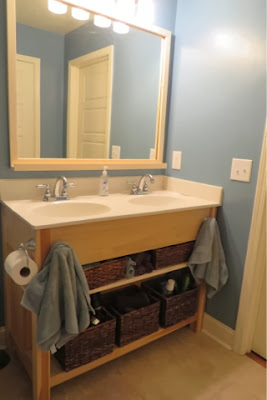 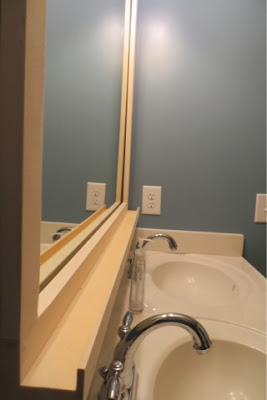 I already had the square baskets on the bottom shelf.  We purchased the long, skinny baskets from Target and store our every day items in those. In the bottom, we have our hand towels and less often used items. I love how it turned out!
If you’d like to try it, leave your questions for me below and I’ll have Corey answer them. He’s the household handy man, thank goodness. What’s your next DIY project at your house?

Born and raised in Atlanta, Georgia, I relocated to a small town outside of Athens after I married. Joining me and my husband on the family farm are many, many animals. My cup is usually filled with coffee and my head is usually filled with dreams of my next destination. Nothing brings me more joy than having a part in creating those long remembered moments that are shared together in places new and old.