I have a LITTLE (well, maybe more than just a little) more Disney left to share this week. It was supposed to be shared this time last week, but summer colds get in the way of accomplishing things unfortunately.

While in Disney a week ago, we were able to enjoy a new character breakfast, the Star Wars Dine-In Galactic Breakfast. It’s only available for a limited time. It started on May 4th (Star Wars Day) and continues through June 15th. 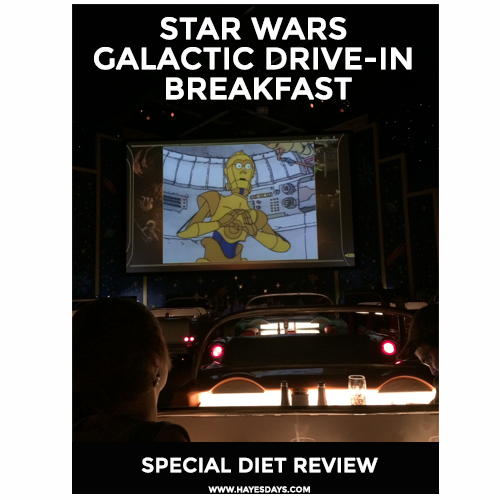 Here are the basics:

Star Wars Dine-in Galactic Breakfast at Sci-Fi Dine-In Theatre
Location: Commissary Lane area of Hollywood Studios
Price: $48 for adults and $30 for children
Breakfast starts early and the last reservation is at 11 AM
I’ve reviewed this restaurant before and it’s one of our favorites, so we jumped at the chance to have breakfast there– something this restaurant doesn’t do. First, let’s discuss how AMAZING the characters are at this breakfast. You meet Boba Fett and Darth Vader as you walk in and Stormtroopers, Jawas, and Greedo wander around the cars while you’re eating. They’re fantastic. Also, these are usually characters you spend hours waiting in line to meet. Over at Capturing Magic, I already talked about meeting these characters and interacting with them, so I’m skipping straight to the food for this post!
Here’s the menu: 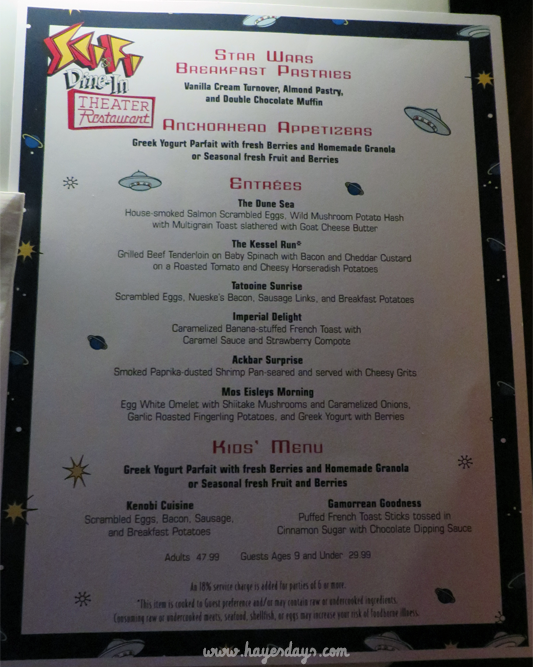 There’s a better picture of this menu here, as well as the back of it, showing the drinks. It’s a four course breakfast, so don’t balk at the price when you see that it’s not a buffet, like most Disney breakfasts. You get plenty of food!
I don’t have a picture of it, but they do serve blue Bantha milk. It was blueberry flavored. No one really cared for it, but you get free refills on non-alcholic drinks, so everything got tried and much coffee was consumed.
The pastries come out first. 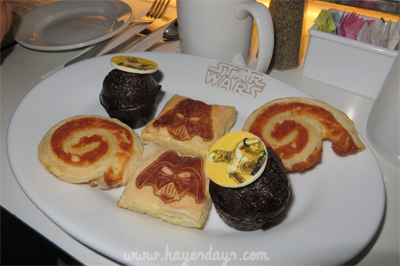 The double chocolate muffins are topped with the edible C3PO decorations. The Darth Vader dusted pastries are the vanilla cream turnovers. The spirals are almond pastries. I wasn’t able to have anything on this plate due to my food allergens to peanuts and tree nuts, so we’ll come back to what they served me instead. All three of these got rave reviews from the others eating at the table, especially the double chocolate muffins.
Next we were served our choice of a yogurt parfait or a fruit cup. 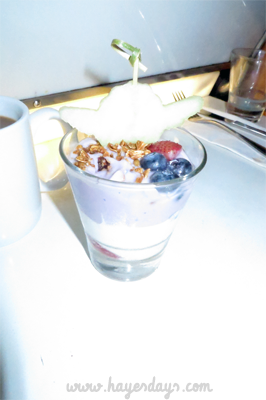 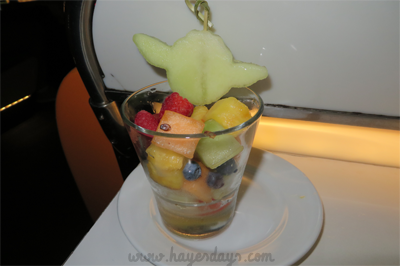 My husband had the yogurt one which was topped with granola and some berries. Mine is the fruit cup. It was mixed melons and berries. The yoda cut out is edible and was cut from melon. Both were tasty.

Next came the entrees. I have pictures of mine and my husband’s meals.

My husband got The Kessel Run.

The steak met with rave reviews, as did the potatoes. I couldn’t taste because they weren’t allergy approved.
I went for the simple Tatooine Sunrise. 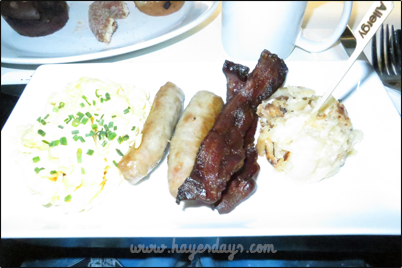 It’s your basic eggs, sausage, bacon, and potato hash-browns. All were good, though I did offer the sausage to my husband because we’d already had so much food!
The other members of our party ordered the Dune Sea, Ackbar Surprise, and Imperial Delight. We all finished our entrees. Don’t be afraid to order what you want here because the entree is included in the price.
For dessert (yes, dessert was served at breakfast) we were served a sweet strawberry mouse with little orange, almost like pop rocks in it. 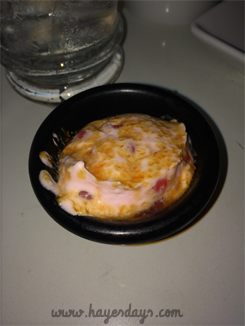 I was unable to eat this because of allergy restrictions, but I think everyone was so full and this was so sweet that we passed on it.
After we had all stuffed ourselves, our waitress came by to ask us if we wanted any pastries for the road! We could’ve requested more, but were were so stuffed by this point.
Now for my special diet recommendations. I’m allergic to peanuts, tree nuts and shell fish. I was served these pastries instead of the others that I previously pictured: 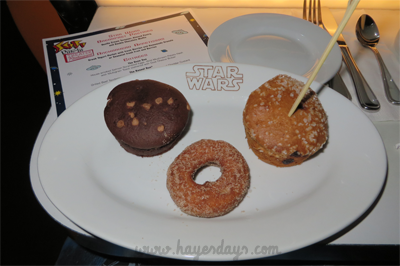 From left to right, I got to taste the double chocolate chip muffin, cinnamon sugar donut, and a blueberry muffin. It was so much food that I only took a bite of each, but they were all delicious. If you were gluten intolerant, you’d probably have to pass on all the pastries. I passed on the yogurt parfait since I didn’t know much about the granola. If you are also allergic to nuts, I would pass on granola. For those allergic to fish and shellfish, I would pass on the Dune Sea and Ackbar Surprise. One has salmon and one has shrimp, and everything on the plate touches.
This breakfast is highly recommended by us!  Let me know if you have any special diet questions in the comments below or with the “contact” form.

Everyone has already moved on to their fall capsules at this point. I, on the other…

This has been the week of perpetual Mondays. I’m so glad it’s over, but I have…

We’re taking a minute from my regularly scheduled post to let you know J.Crew is having…

It’s Thursday! Time to share my favorite of the week. This week, I decided to go…

Hello and happy Monday, y’all! Let’s do this thing! To start off the week, here’s a…